On the 22nd of September 2020, a Consortium meeting was organized by NORSAR (Project Coordinator of TURNkey) to prepare the important upcoming deadline of the end of the 1st Reporting Period (November 2020), marking the half of the project. A first version of the TURNkey platform, one of the main objectives of the project, has to be ready by then. The different technical WPs have now started producing algorithms and models that need to be incorporated in the platform. The meeting was therefore focused on the status and definition of this first version, as well as the vision for the 2nd version planned for May 2021 and the Final version planned for January 2022. A detailed description of the functionalities and algorithms composing the scientific engines of the platform was discussed with the partners and a mock-up of the Graphical User Interface was presented in an interactive way.

Online Workshop on the DSSs progress in TURNkey

TURNkey held a Task 5.3 (Development of Decision Support System (DSS) for OEF and EEW) workshop on July 2 via videoconferencing, with more than 20 participants. The purpose of the workshop was to showcase current task progress, identify synergies among the task’s various working groups, and begin a preliminary discussion about the structure of Deliverable 5.3 (due September 2021, M28). During the first part of the workshop, groups from University College of London, Eucentre, and University of Strathclyde presented the preliminary findings of their work on the development of DSSs for the Operational Earthquake Forecasting (OEF) and Earthquake Early Waring (EEW) across a wide variety of applications, including schools, ports, warehouses, and bridges. The second part of the workshop involved a productive discussion among all participants covering topics such as the practical implementation of the DSSs within the TURNkey platform. 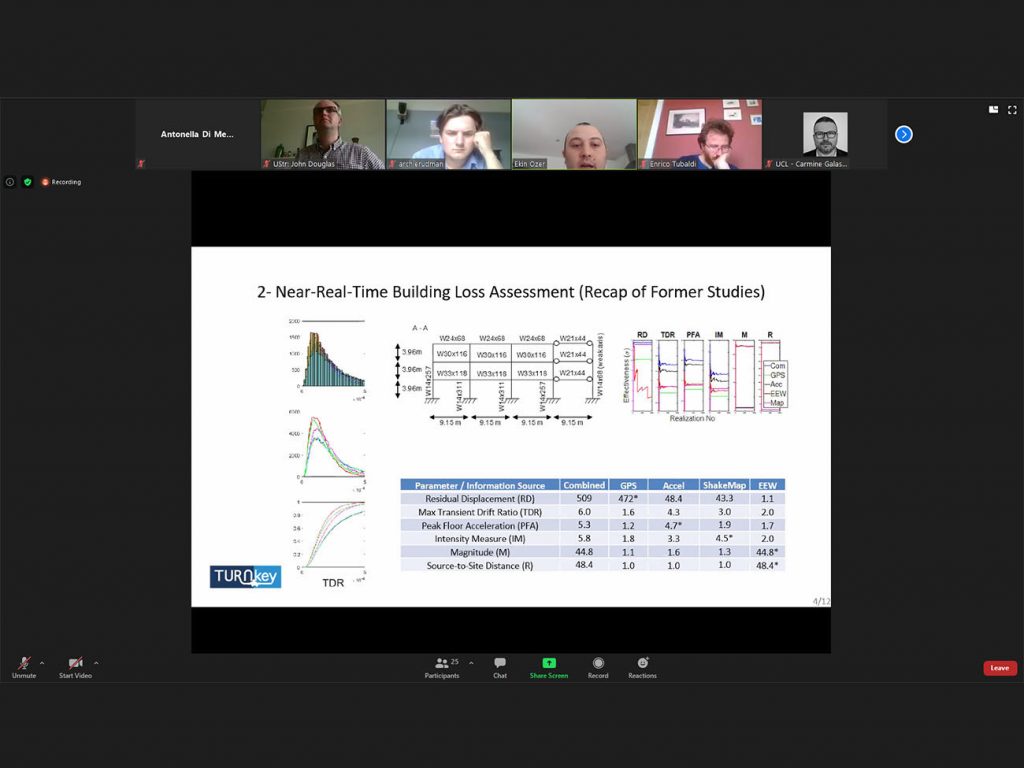 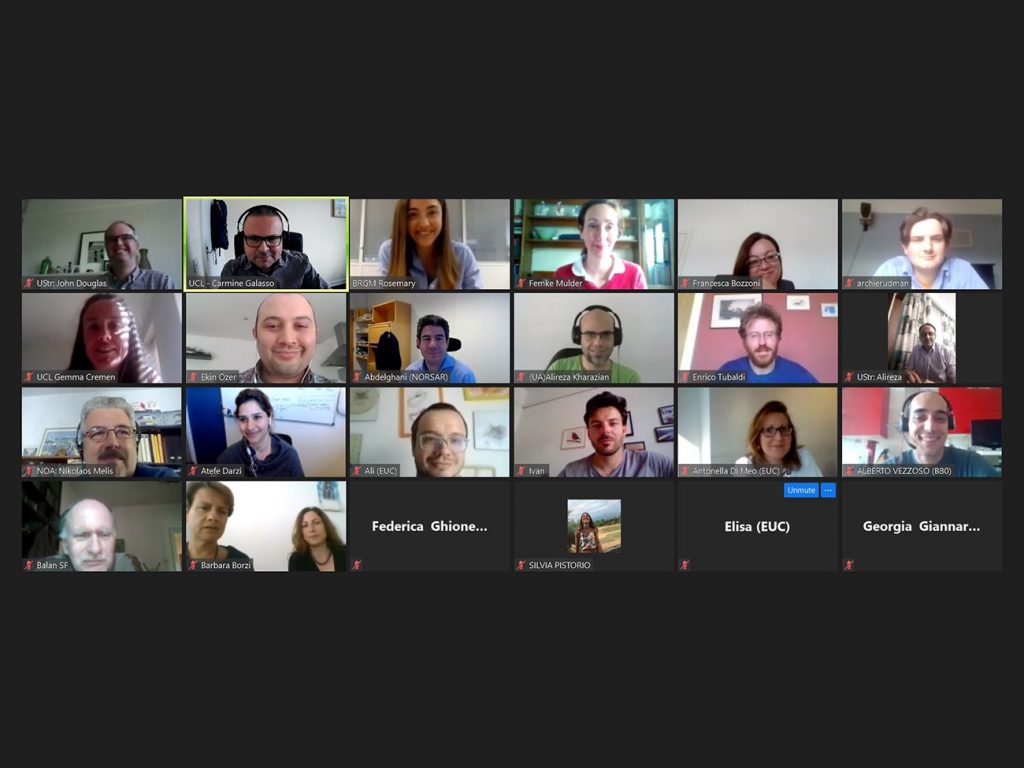 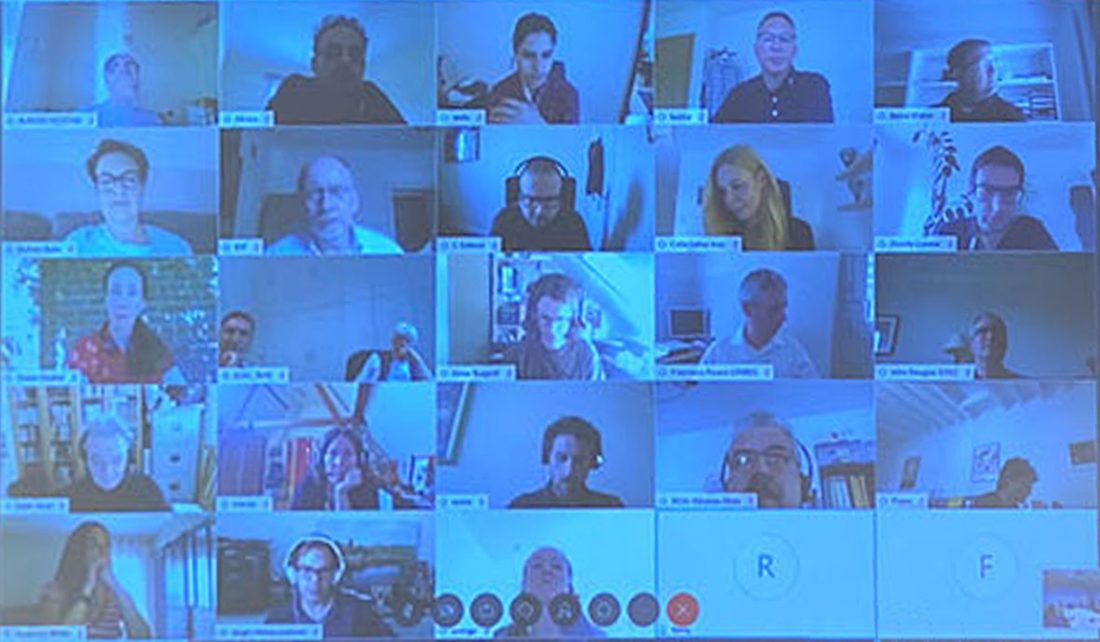 On 20th of May 2020, the General Assembly of 2020 was held on Webex since any physical gathering is for now impossible given the COVID-19 situation. The annual meeting that was planned in Groningen on the 16th and 17th of June 2020 is postponed until the situation changes and the travel restrictions are lifted (possibly autumn 2020). The items on the agenda of the GA were the status of the project (in terms of deliverables and milestones until November 2020, the end of the 1st Reporting Period), a summary of the results of WP1 presented by Keith Jones (ARU) and Celia Callus (NTC), an analysis of the Internal Reporting that was performed at the end of the half of the 1st Reporting Period, and a status update about the impact of the COVID-19 situation (delays, contingency plan, etc.). 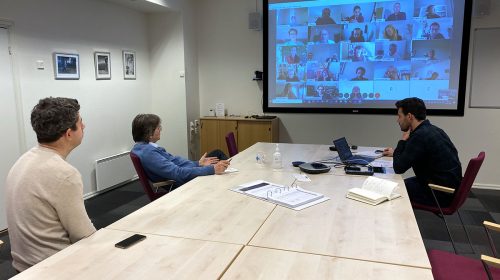 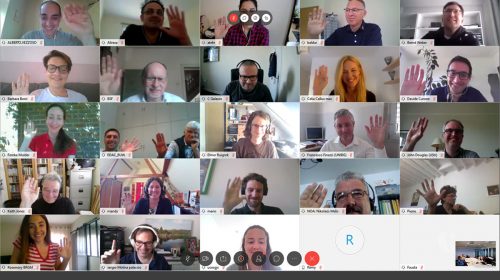 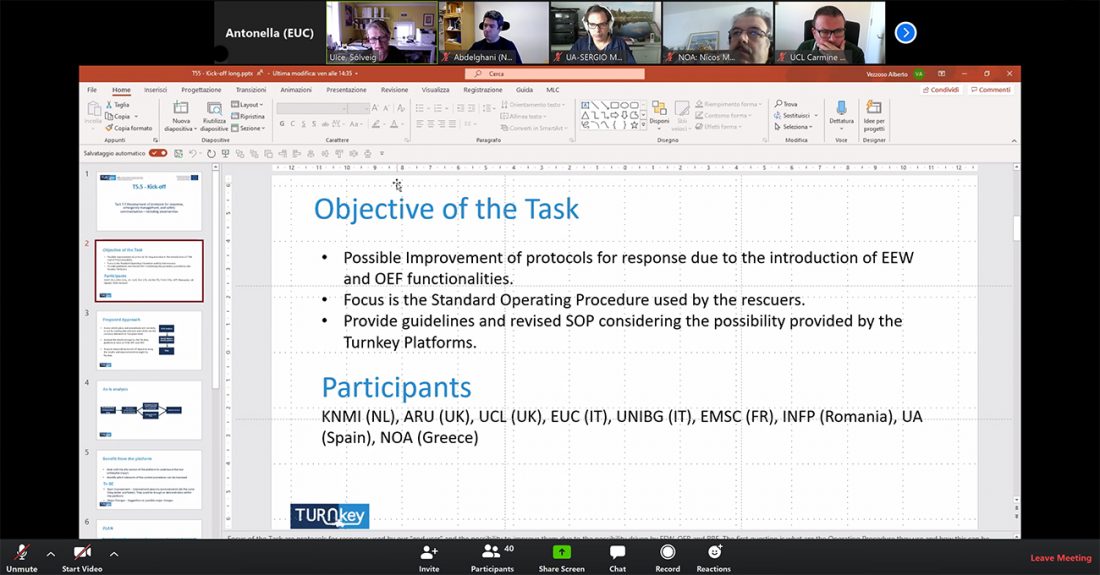 Virtual Workshop on W4 and WP5

Due to the current COVID-19 outbreak, on the 21st and 22nd of April 2020, TURNkey’s partners met together for a virtual workshop on WP4 and WP5. The event was chaired by Bureau de Recherches Géologiques et Minières (BRGM) and University College London (UCL), leaders of WP4 and WP5, respectively. On April 21st the event addressed the topics of WP4 while the topics of WP5 were mostly discussed the day later. In both days, between 30 and 45 people participated in the workshop at various times with all WP4 and WP5 partners well represented. In the following, summaries of what happened for WP4 and WP5 are reported.

State-of-art and future development of WP4

The WP4 has the objective of estimating the physical and systemic vulnerability of residential buildings and critical infrastructure systems, while updating rapid loss predictions in near-real time.
During the first part of the workshop on WP4, the partners attending the event discussed the available exposure data for residential structures and agreed that SERA exposure data will be used as a “baseline”. Nevertheless, if available, data that are more specific for each TURNkey testbed will be also integrated.
Fragility models to estimate damage and deduce losses will be chosen accordingly. In this regard, some review work is progressing to study the critical infrastructure systems in the different testbeds of the project. Specifically, the partners involved in the tasks 4.1 and 4.2 of WP4 are working together to harmonize the framework on the estimation of the functional and systemic vulnerability.
In addition to the models that will be chosen from the technical literature, recordings from instrumented structures will be used in TURNkey to detect the damages in real-time. In this regard, during the second part of the day, the partners discussed the different real-time damage detection tools to be tested and integrated in the TURNkey project. Another source of the real-time damage detection is the crowd-sourcing from in-situ citizen observations. TURNkey will test a new approach to engage the community to share their observations as well as their position on mobile applications (e.g. the Earthquake Network application). At the end, all these elements (i.e. fragility models for physical and functional damage, as well as the different real-time detection tools) will be combined to accurately predict expected losses in a rapid earthquake response context, using an earthquake scenario software such as SELENA. In parallel, a Bayesian framework for the direct integration of field observations will be investigated.

State-of-art and future development of WP5

The WP5 focuses on the development of next-generation decision-support systems (DSSs) for earthquake early warning (EEW), operational earthquake forecasting (OEF), and rapid response to earthquake impacts (RRE).
During the first part of the workshop (Tasks 5.1 and 5.2), various partners discussed the progress that has been made towards developing both qualitative and quantitative community and resilience models, and defining performance indicator metrics. These models and metrics will be used for scenario-specific risk and resilience forecasting, in terms of economic loss, casualties, and business interruption (downtime), which will act as inputs to the various DSSs and enable a comparison of different options for risk mitigation. Metrics and models that have been developed to date leverage a wide variety of tools, including fuzzy cognitive mapping, system dynamics modelling, and Bayesian statistics.
The second part of the workshop examined the methodologies that underpin the proposed EEW/OEF/RRE DSSs (Tasks 5.3 and 5.4), as well as the improvement of emergency response protocols due to their implementation (Task 5.5). The developed DSSs will represent an important paradigm shift in current approaches to issuing early warnings for natural hazards, as they will explicitly account for end-user preferences and incorporate engineering-related (risk and resilience) metrics for more effective risk communication. The proposed DSSs make use of multi-criteria decision-making theory, state-of-the-art tools from performance-based earthquake engineering, and Bayesian statistics.
As a follow-up to this workshop, several further smaller meetings have been planned to better refine specific research issues. For example, a focused working group will address the issue of how the platform will communicate an “all-clear” alert after an event, when the risk of an aftershock is sufficiently low. 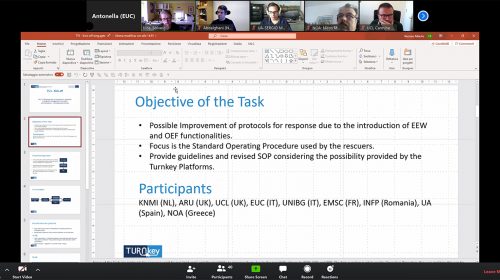 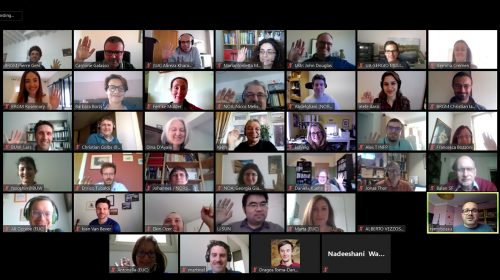 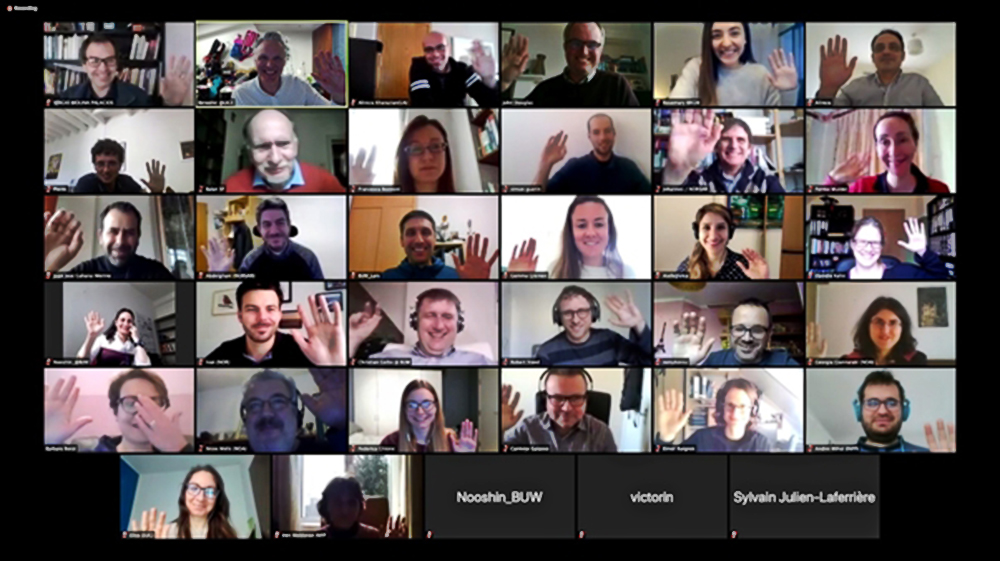 Due to the current COVID-19 outbreak, on the 26th and 27th of March 2020 the WP3 workshop was held on-line and not at BRGM’s offices in Paris, as originally planned. The conveners for different sessions were UStr, UCL/EUC, BRGM, INFP, EMSC/UNIBG, EUC and BRGM and the overall event was chaired by John Douglas and Alireza Azarbakht (UStr, the leaders of WP3) with logistic support by Benedikt Halldorsson and Atefe Darzi (UIce). Between 35 and 40 people participated in the workshop at various times with all WP3 partners well represented. The meeting was focused on the two ongoing tasks related to operational earthquake forecasting, early warning and rapid response actions. Additionally, the kick-off meetings for two new tasks on early warning and rapid response actions were held during this event. The workshop was very productive and highlighted a number of points where there is scope for stronger collaboration amongst partners and tasks in order to avoid duplicated efforts and to lead to better project outcomes. New ideas for how to achieve the project’s objectives were also developed. 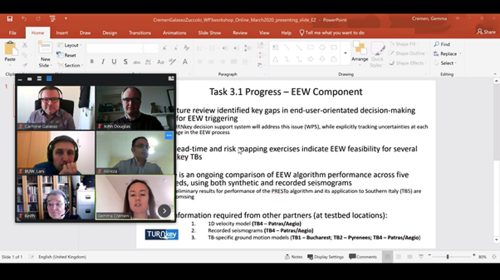 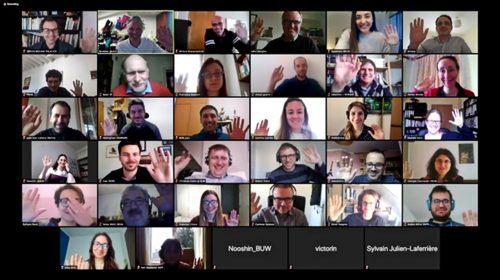 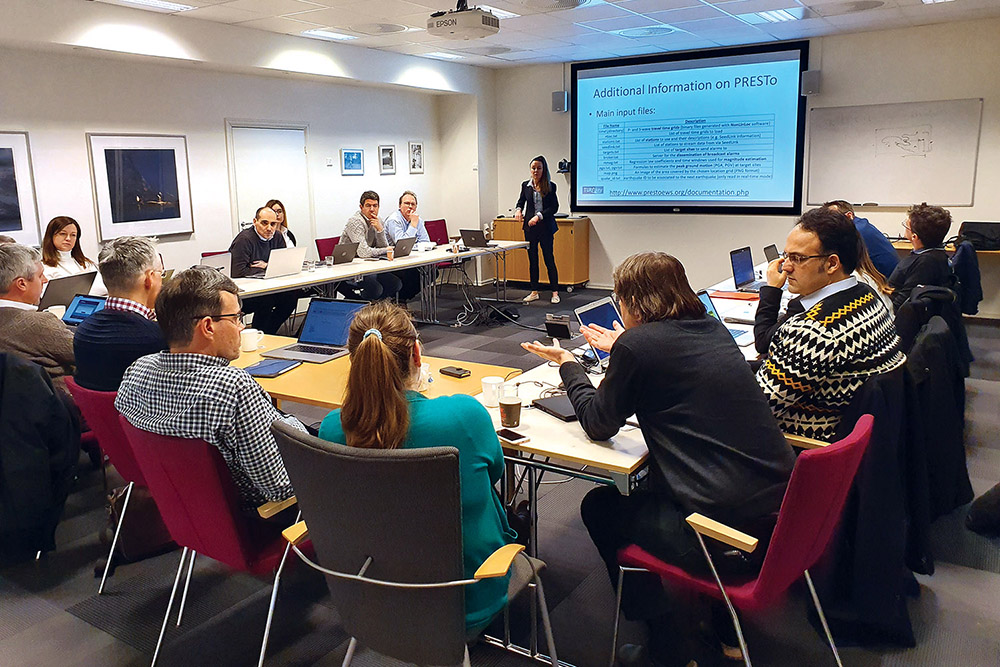 The first Workshop of the TURNkey project was the WP6 Workshop organized by NORSAR (Coordinator) at the end of January 2020 at NORSAR’s office in Kjeller, Norway.

The idea of the Workshop was to gather the main contributors to WP6 at an early stage of the project to discuss upfront the goals and the objectives of the TURNkey FWCR platform and its technical specifications (format of input data, language of algorithms, etc.). The main contributors of WP6 are:

The workshop was very productive in terms of discussions. A common understanding of the objectives and detailed specifications of the platform is now shared by the participants and that vision will be implemented in the work with the other partners involved in the project. 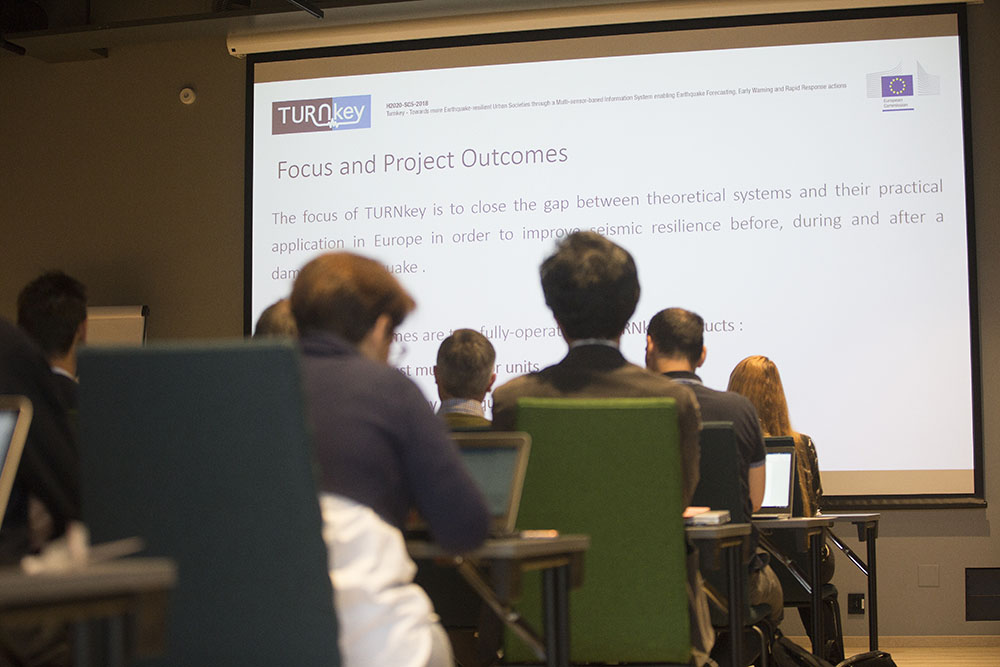 On June 13 and 14, 2019, the Scandic Holmenkollen Park in Oslo, Norway, hosted the Kick-Off meeting of the TURNkey project where the representatives of all 21 project partecipant organisations took part.